By Tony Traficante, Lt. Colonel, US Army, (Ret.)
“America without her Soldiers would be like God without His Angels.” -Claudia Pemberton
It was early morning, cold and damp, a chilled drizzle surrounding the area…
They lay in trenches waiting for more, but hoped the weather would deter further attacks. The battlefield before them was quiet…too quiet. Little did they know that not far away in a railcar, Germany surrendered and signed the armistice agreement with the Allies.
The “war to end all wars” was over, leaving behind some nine million dead soldiers and millions more wounded. It was November 11, 1918, the 11th hour, on the 11th day of the 11th month.
It was Armistice Day, now Veterans Day.
The story of our Veterans is one of bravery and determination. No matter the orders, they have always answered the call.
In 1775, they fought to build a nation; then in 1861, they fought brother against brother, to piece our country back together. In 1917, and again 1941, they were in Europe and the Pacific, fighting tyrants to free millions. They fought in the bitter cold mountains of Korea in 1951. They were in the jungles of South Vietnam in 1965. They fought in the hot deserts of Iraq and then in the rugged mountains of Afghanistan. They are ever-vigilant, ever-watchful.
Veterans are everyday people: they are family, neighbors and friends. They entered the military at a young age, some not even old enough to drink or vote. Their “basic” training was tough, it was extensive, it was precise, and it built character. Discipline and teamwork were crucial — their lives depended on it. They came as “recruits,” they left as “old hands.”
They all took the oath to defend the United States against all enemies, foreign and domestic…and they have.
They have not failed us and we must not fail them. It is our duty to care for the wounded and support our military, their families, and our Veterans.
God bless them, and God bless our great nation.
Click the ISDA Facebook post below to view our Veterans Day Memory Wall, and please add your stories of past and present heroes. 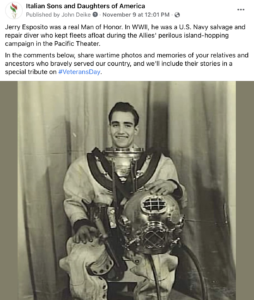 Make a pledge and become a member of Italian Sons and Daughters of America Today
Tony Traficante, Lt. Colonel, US Army, (Ret.)
Charlie Geno Giovanelli and Al Bruno Bianchini serve in the U.S. Army’s 44th Medical Brigade, Vietnam 1967. (Facebook, ISDA)
Share your favorite recipe, and we may feature it on our website.

Join the conversation, and share recipes, travel tips and stories.
Nearly a century ago, on June 3, 1921, a devastating flood consumed a city built up by Italian immigrants. Here’s their story.
Using visionary tactics, businessmen and entrepreneurs breathe life back into the country’s abandoned villages and towns.
The Italian folklore offers a faithful lesson in reminding us to see the good in others.
Founded in 1930, ISDA has kept its strong sense of community alive and thriving to become one of the largest and most financially successful Italian American organizations in the country. We now unite Italian Americans across states nationwide to celebrate our culture and preserve the traditions our ancestors brought with them from Italy.
Share your email address with us
Italian Sons & Daughters
419 Wood St., #3
Pittsburgh, PA 15222
T. (412) 261-3550
E. info@orderisda.org
© 2022 Italian Sons & Daughters of America