The worlds are coming to Wollongong this weekend with the elite time trials the first races to be contested on Sunday 18 September. There are myriad activities associated with the championships taking place, including a cycling-specific art exhibition at Sage Hotel only a few hundred metres south of where the races will finish near City Beach… 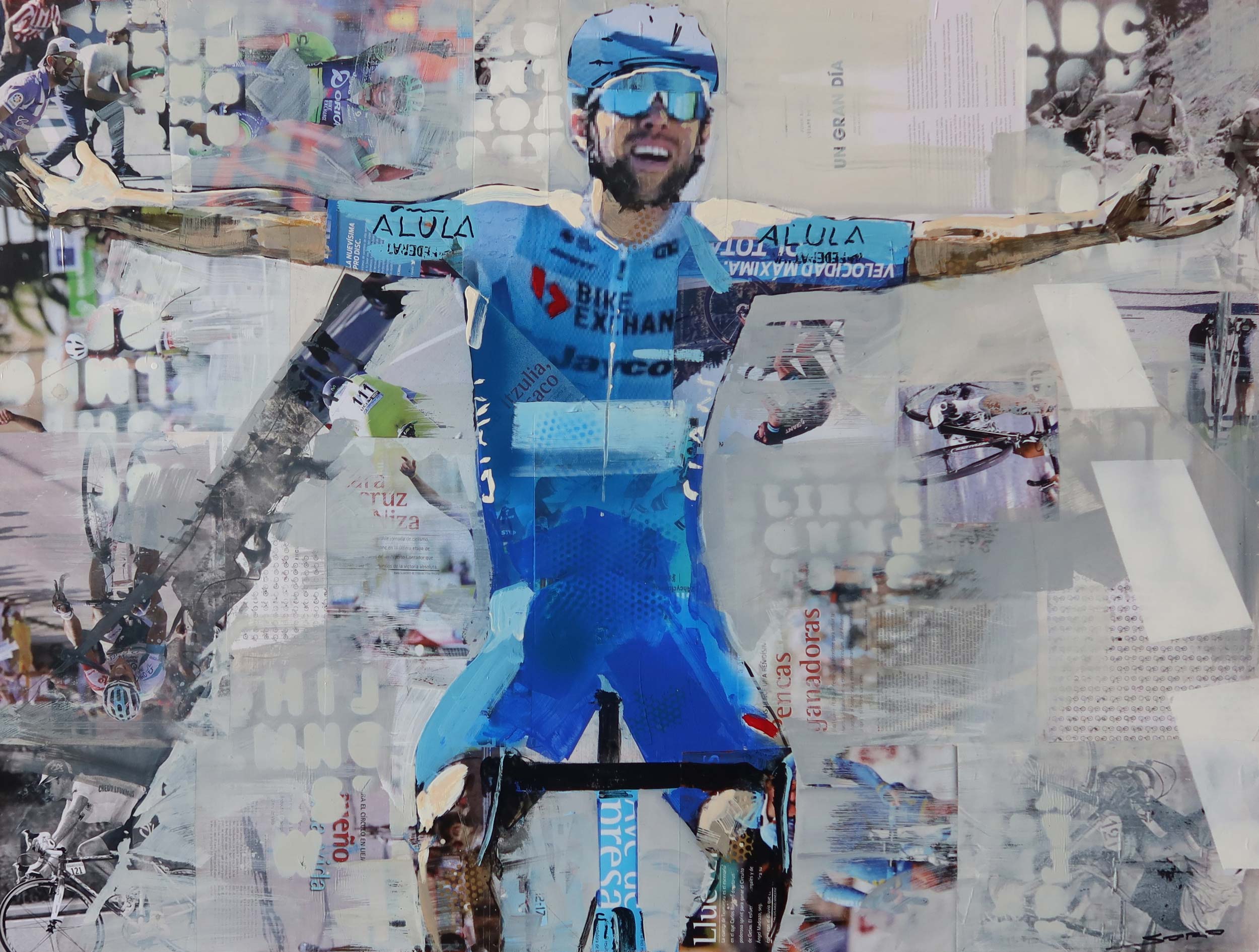 Cycling will be a dominant theme in and around Wollongong in the coming weeks with the UCI Road World Championships coming to town and there are activations aplenty for locals and visitors alike. The aim of this major sporting event is to promote cycling and, of course, attract people to the Wollongong region while also showcasing why the Illawarra has become home to Australia’s first UCI Bike City.
Sport is the centrepiece of the championships and there are 11 races on the schedule from 18 to 25 September but it is also a chance for the region to show what a great place it is to have a holiday.
One business that is responding to the opportunities the world championships present is Sage Hotel Wollongong. The manager, Mark Upton, is a keen cyclist and he and his staff have organised a range of activations to help visitors planning a trip to town to watch the racing.
“For us it’s the first major event since COVID,” explained Upton about the championships coming to Wollongong. “So, it’s really exciting to get our staff up and about a little bit more than we normally do.
“We’ve got an amazing team at the hotel who are used to these big events but something with the magnitude of the cycling world championships is a different kettle of fish… but the boxes are all getting ticked, and the excitement is building.”
Miguel Soro’s portrait of former Australian champion Amanda Spratt. This is one of the works that will be on display at Sage Hotel Wollongong.
Sage Hotel Wollongong is located right next to WIN Stadium and only a few hundred metres from City Beach where the races will finish. This is where the Australian team will be staying, and it’s also where visitors to Wollongong will be able to rack – and clean – their bikes, grab a coffee (and some autographs), and also check out a fantastic cycling-specific art exhibition.
Spanish artist Miguel Soro has created a series of paintings for his ‘Chasing Rainbows’ show that will be on display at Sage Hotel Wollongong for the duration of the championships.
Scroll down to see more of Soro’s work or drop into the hotel if you happen to be in Wollongong later this month. It’s cycling and art coming together in a unique and original manner, with portraits of famous riders from over the years.
Miguel Soro’s painting of Phil Anderson during the 1981 Tour de France when he was the first Australian to wear the yellow jersey.

A former professional cyclist himself, Soro (46) has exhibited all over the world, and was honored to show his work in both the centenary celebration of Fausto Coppi in Italy and during the Tour de France. This is his first exhibition in Australia.
Miguel Soro says he has gained insights to his work by observing the public response.
“It is mainly focused on the cycling public, but I see that it also engages non-fans of this sport, even those who don’t like it. For me, it is a huge honour to bring my work to show the Australian public during this international cycling event”.


Anderson during his years with the Panasonic team.
“There are 25 pieces, each measuring roughly a metre and a half by one metre,” said Upton of Soro’s paintings that will be hung in the lobby of Sage Hotel Wollongong next week.
“The exhibition came about thanks to Destination Wollongong, the local tourism department that’s behind the #VisitWollongong campaign. They contacted us and that’s when I got to meet the legend who is John Trevorrow,” said Upton about how Soro’s work found its way into Sage’s lobby.
“He was able to come to our hotel for a pre-race visit and he asked if we’d be interested in showcasing Miguel’s pieces. They are quite amazing artworks, and a lot of effort has been put into them. We’re super lucky and privileged that Miguel was keen to put his work on display at our hotel.
“The thousands of people who are coming to the Wollongong area can come through and have a look, get to see these amazing pieces of art, and hopefully get to meet Miguel. He will be here at the hotel, and he’s always happy to have a chat about all things to do with his two passions, cycling and art.”
Soro won’t just be on hand to watch the racing when he’s visiting Wollongong, he also plans to create some more art while the action is taking place. “He’s looking to do two or three pieces with the world championships of 2022 being the key theme,” explained Upton.
An iconic moment in Australian cycling history: the final moment of the battle for the green jersey at the 2003 TDF… Baden Cooke vs Robbie McEwen.
As well as the Miguel Soro exhibition, Sage Hotels Wollongong has arranged a host of special initiatives for the period of the championships, including a free bike wash bay and bike storage for riders who are coming to town but don’t want to have to worry about their bike while watching the races.
“For us the arrival of the world championships is more about the region,” says Upton. “It’s a great case to showcase Wollongong and its surrounds and if Sage Hotel can be part of that as a business, that’s a fantastic opportunity.
“We want to take advantage of the glut of visitors for the actual period of the championships, but my hope is that we can but also share what we already know: that Wollongong is a great place to visit.
“We’ve got 168 rooms in our hotel and the majority of those have been booked by people who are coming to Wollongong for that period of the championships.”
Caleb Ewan in full flight… power and aerodynamics in action.
Sage Hotel has witnessed first-hand the impact that the championships have had on Wollongong, as all rooms are now fully booked. The close proximity to the finish line means that there will surely be a crowd of bike riders nearby, and Sage has some features in place to make things easier for visitors to manage when they come to Wollongong.
“As well as Miguel showcasing his original art pieces from Saturday 17 September through to Sunday 25 September, we’ve also got a FulGaz activation of their virtual reality bike ride using the Wahoo Kickr bike in the hotel bar – that will be on the final days of the event.
“We’ve also got a third ‘mini cafe’, with an extra coffee machine out the front of the hotel. There’ll also be a pop-up shop so you can get all of your bike needs – gas canisters, tubes, gloves, water bottles… all of those items that, as cyclists, we can need when out on our bikes.
“During the week we’ve also got John Trevorrow doing live podcasts in the lobby of the hotel. He’s flying back from the Vuelta this week and he’ll be in place at Sage from this Friday until the end of the championships.
“We’ve also got some free bike racks set up out the front from this weekend onwards, so anyone can come down to the hotel, rack their bike up, grab a coffee and walk over to the finish or the start of the city course which is only 300 metres from the hotel. There is also a complimentary bike wash area… you’ve got to do the work yourself, but we’ve got the suds and the hose and it’s all in a secure area. We’ve been able to arrange this with the help of BikeSportz, a business with a long history of supporting cycling in Australia.”


– By Rob Arnold
Soro’s interpretation of Richie Porte during the TT up the Col d’Eze when he was the Australian time trial champion.
Evans in one of his first races as world champion, Il Lombardia of 2009.
Australia’s second Grand Tour champion, the winner of the Giro d’Italia of 2022, Jai Hindley.
The Greatest… Eddy Merckx, in the rainbow jersey.
MVDP… one of the favourites for the final event of the 2022 world championships.