Born in Moncalieri, near Turin, Silvio Porzionato graduated from art school and became head designer at one of the most important design companies in Turin for nearly a decade.
After spending a moment of reflection in nature, he came to a resolution that his true calling was that of an artist’s life. This momentous decision was proved correct, as he was immediately recognised as a talented painter in his native Italy, where was selected for the prestigious Mondadori Art Prize. In 2010, some of his work was acquired by the Museum of Urban Art, in Turin, and in the following year he was selected to participate in the 54th Venice Biennale. Then in 2013, he created three incredible installations comprising of 112 paintings for the Museum of Contemporary Art in Sicily.
As a proud Italian national, Porzionato is, of course, acutely aware of his country’s rich cultural history, dating back to the Roman era and then onto the Renaissance in the 15th century, when the country produced great Masters such as Leonardo da Vinci and Michelangelo. True visionaries and giants in the canon of art history. His art style – portraiture based on realism – is very much in keeping with the Renaissance ideals, in terms of Humanism and an appreciation of beauty and aesthetics. 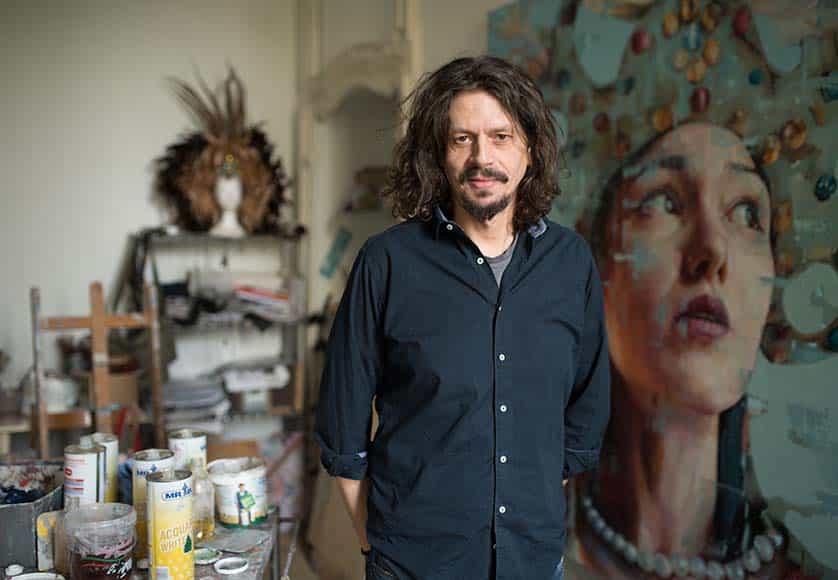 The notion of capturing the inner essence of the subject stems from classical antiquity, as Aristotle stated, “The aim of Art is to present not the outward appearance of things, but their inner significance, for this, not the external manner and detail, constitutes true reality”. Perhaps this truism is part of the enduring fascination with the Mona Lisa, her internal world, a mystery hidden behind that famous ‘enigmatic smile’.
Porzionato himself states that is the intention behind his art, which is to “underline the supremacy of the inner self as opposed to that of the physical body”. In the first instance, he captures the soul of sitter with photography be it family, friends, the occasional model or even a passer-by on the street that takes his interest; he clearly enjoys the spontaneity of it all. Then he creates the paintings, working on a large scale, perhaps a nod to the monumental private commissions of the past. Porzionato possesses the confidence of a fine draughtsman, creating realistic portraits, with subtle tonal brushstrokes.
The subjects are self-conscious of the camera, creating various moods and poses. There is a deliberate staginess to the work which is heightened by the inclusion of headdresses and fashion millinery. 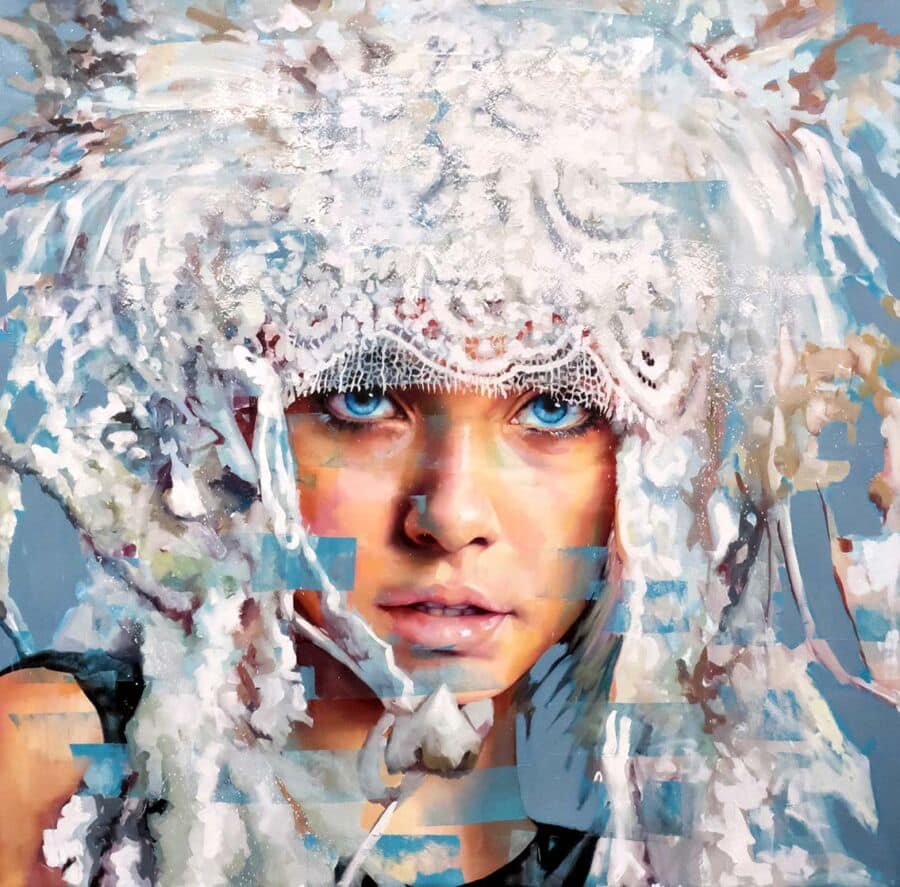 As he states: “I paint figures with a particular headdress or with other objects, to try to create invented character… a theatrical figure, a kind of my own figure that becomes iconic. The models, whom I first photograph, become ‘actresses’ of the world I want to represent. In this way, I can depersonalise the figure and make it a ‘theatrical character’ of the great scene that is the world. It is as if the headgear were the stage dress, the disguise.”
The addition of these elaborate headdresses is not just for dramatic effect, but act as compositional devices, lending an almost abstract element to the portrait. This loose and painterly technique is further enhanced by the artist, through disrupting the surface and in parts obscuring the realism of the face with bold colourful brushstrokes. “I love to paint the figure realistically, but at the same time I need to ‘dirty it up’. It is as if there were two styles of painting in me, the relational figurative and the informal abstract,” he explains. “With realistic painting, I work with my more rational, precise and objective side, whilst the more informal paintings are made with the more poetic, instinctive and irrational side of me. I would be able to do a hyperrealist painting, but only the most virtuous part of me would come out. And I need to let myself go; I need that emotion that comes over you if you throw a bucket of paint on an already painted canvas, I need those few seconds of poetic madness.”
It should come as no surprise that Silvio Porzionato’s work is highly sought after. The quality of the representational painting and this delicate balancing act between realism and abstraction has led to numerous exhibitions all over the world, showing with prestigious galleries from Hong Kong to London, Paris, Bogotá, New York, Miami, Chicago and Istanbul. He has shown work at the leading international art fairs, such as Art Miami, where his paintings are immediately snapped up.
“Silvio does not use professional models for his paintings but friends and unknowns. He turns these impactful faces into beautiful masterpieces,” Gillian Catto, owner of ArtCatto gallery, states. “They are amazingly powerful faces; you cannot take your eyes off their extraordinary beauty. They are surrounded by glorious colour which makes them totally irresistible and positive. It is true that size does not matter. However, these large works make a statement on a wall for their strength and masterful technique.”
Silvio Porzionato’s work is currently on display with ArtCatto at the Conrad Algarve.
By BEN AUSTIN
If you are considering moving to the Algarve permanently at some time in the future, living here part time or maybe looking at setting up a business in the Algarve, our seminars offer a unique opportunity to have all your questions answered in one place, at one time.
Next seminar: 22nd September 2022, Conrad Algarve Hotel
Save your Free Seats
September 1, 2022 Edition