“Je suis Modigliani, Juif” — in English, that’s “I am Modigliani, Jew” — forthrightly declared one of the most celebrated Jewish émigré artists working in France before World War I.
A Sephardic Jew born in Livorno, Italy, Amedeo Modigliani (1884-1920) became a luminary of modern art. Beginning with his 1906 arrival in Paris, he came to know all the key personalities who created the most radical art of the early 20th century, yet Modigliani established his own distinctive individuality in a career that lasted only 14 years. 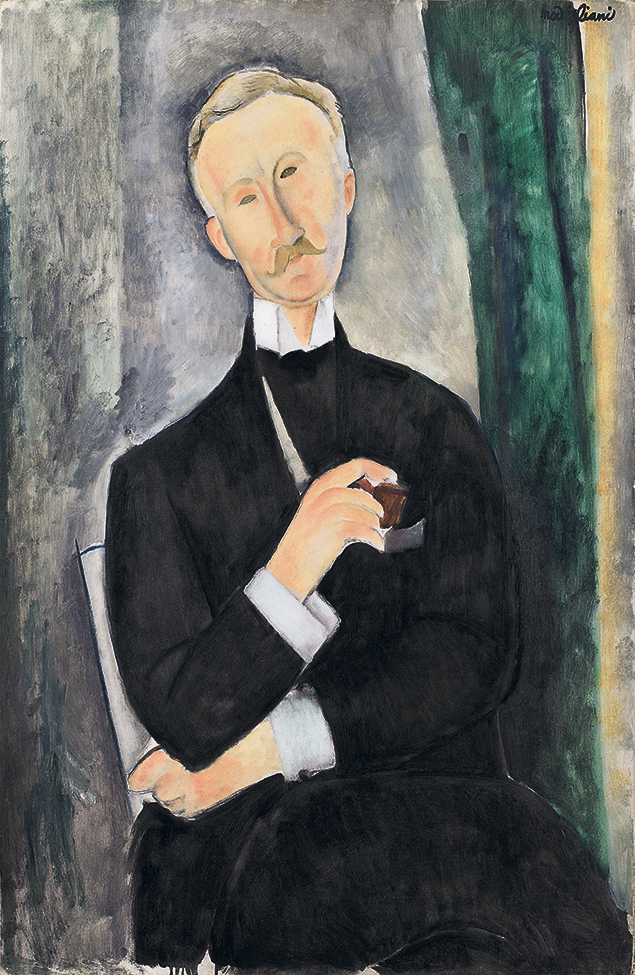 “Modigliani Up Close” is an impressive and ambitious exhibition at the Barnes Foundation on the Benjamin Franklin Parkway in Philadelphia that runs until January 29, 2023. The show, which is exclusively seen at the Barnes, focuses on Modigliani’s creative process, sidestepping his compelling biography. The nearly 40 figurative paintings and eight sculptures are arranged chronologically and thematically to demonstrate how the handsome young man attained his artistic maturity. With a careful selection of work borrowed from more than 30 individual and institutional lenders, the insightful special exhibit deals with the deliberative evolution of his working methods as he gained artistic confidence. The show relies on the latest art historical analysis and scientific research from an international collaboration of 61 curators and conservators, including three from Israel.
Get The Jewish Standard Newsletter by email and never miss our top stories Free Sign Up
It is most fitting that the exhibition has been organized at the Barnes Foundation, whose founder “discovered” Modigliani, elevating the artist’s international reputation. Exactly 100 years ago, Dr. Albert C. Barnes traveled to Paris and began buying paintings, works on paper, and a sculpture, amassing what is today one of the “most significant holdings of Modigliani’s work in the country,” Barnes curator Cindy Kang wrote in her essay, “An Early Adopter: Albert C. Barnes and Amedeo Modigliani,” in the exhibition catalog for “Modigliani Up Close.”
Back in the 1920s, the Philadelphia Inquirer dismissed Barnes’ collection as “crazy art … nothing more or less than symptoms of mental degeneracy.” Despairingly singled out were the “distorted, wooden-necked monstrosities by Modigliani” dubbed a “‘compressionist’ … as if some frightful pressure had been applied to the skull.” Barnes’ last Modigliani purchase in 1926 was a reclining nude (Room 21) bought for $1,750. Just four years ago, a similar female figure, also observed from the back, fetched a stunning $157 million at Sotheby’s in New York.
The 15 canvases and three drawings voraciously acquired by Dr. Barnes are seen in the foundation’s permanent galleries. The wall ensembles arranged by Barnes have been legally protected since his death in 1951. Thus, no artworks can be removed and rehung in the museum’s special exhibition gallery, even temporarily. An illustrated pamphlet accompanying the show directs visitors to the Modigliani paintings and works on paper displayed in the rooms of the main building. 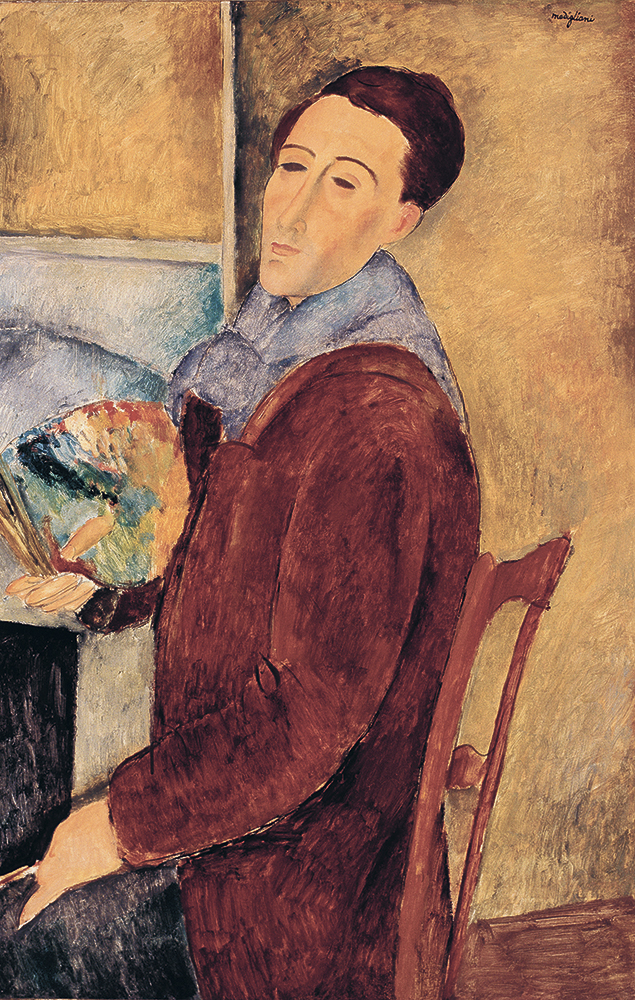 Modigliani also will be coming to the silver screen. A European-based production will begin filming next year. To be directed by Johnny Depp and co-produced by Al Pacino, the movie is a “free adaptation” of an Off-Broadway play. Its screenwriters, Jerzy and Mary Kromolowski, recently saw “Modigliani Up Close” and revisited the collection, with its many Modiglianis and works by the artist’s friends like Chaim Soutine and Maurice Utrillo. Titled “Modi,” the film isn’t a biopic but will focus on a few days in 1916 and has the potential to bring the Jewish Italian painter and his bohemian lifestyle to a wider audience.
Soon after his bar mitzvah, Modigliani began drawing lessons. He was determined to be a painter. Once immersed in the Parisian art scene of Montparnasse, he assimilated influences, maturing as an artist. Aside from four landscapes (one is part of the permanent collection at the Barnes), Modigliani, called Dedo by his family and Modi by his art friends, focused on portraits, figure studies, and sculptural heads; none of his figurative work has explicit Jewish subject matter. Nudes make up just about 10 percent of his production, yet they do comprise some of his most controversial images.
His signature style is marked by sinuous figures with elongated necks and stylized faces with almond-shaped, pupil-less eyes. His subjects possess a close-up intimacy as they are presented within arm’s reach of the viewer. Jacques Lipchitz, the Jewish-Lithuanian sculptor and close friend of Modigliani, remembered: “He could not permit abstraction to interfere with feeling.”
With limited resources during the early days in Paris, Modigliani resourcefully reused his own canvases as well as those by others. He effectively layered over the existing textures and colors of these appropriated surfaces to make new paintings from the old ones. Rather than buying expensive art supply materials, he even experimented with cheaper commercially prepared cardboard.
The earliest picture on view is “Nude with a Hat,” which dates from 1908 and has a textured surface of loose brushstrokes. The work, on loan from the Reuben and Edith Hecht Museum at the University of Haifa, is painted on both sides; its reverse is visible by how it has been framed and displayed. Scientific research has found that there are six different images on the reused canvas, revealing the young artist’s exploratory experimentation.
For a short time between 1911 and 1914, Modigliani was intensely involved with sculpture. Befriending masons, he secured stones from building sites around Paris. A gallery at the Barnes includes a selection of eight sculptures that can be viewed from all sides. The artist carved directly into the limestone. The stylized heads still retain faint traces of wax, confirming that Modigliani lit candles atop them to create an atmosphere of an ancient temple in his studio. He would even set them at varying heights like “tubes of an organ,” as Jacques Lipchitz wrote in his 1954 biography of the artist.
There are several images of portraits of the model Jeanne Hébuterne, who was the artist’s companion and the mother of their daughter. In fact, one image dating from 1919 shows Jeanne wearing a white sleeveless top, but it is uncertain whether this is her first or second pregnancy. Despite its luminosity, there is a sense of sadness as his beloved looks toward the viewer. Months later, when she was nine months pregnant, Hébuterne committed suicide the day after Modigliani’s death.
“Self-Portrait” shows Modigliani in a jacket, with a sweater tied stylishly around his neck, sitting at an easel. The colors on the palette in his hand are used throughout the canvas. It had been thought that Modigliani employed a very reduced range of colors; however, latest research reveals a far wider array of pigments. The stylized head with rather close-cropped hair is almost masklike. It is gaunt, contrasting with earlier photographic images of his fuller face and curly dark hair. This hints at the artist’s diminishing health. Because the ocher walls suggest his last Parisian studio, scholars believe this was one of Modigliani’s final paintings, completed shortly before his untimely death.
In 1920, when he was 35 years old, Modigliani died of tubercular meningitis aggravated by drugs and alcohol, tragically ending a life far too soon. Modigliani had often told friends that he wanted a “short but intense life.” The artist is buried in a Jewish section of Père Lachaise cemetery in Paris. His tombstone is inscribed: “Morte lo colse quando giunse alla gloria” — the Italian translates as “Death welcomed him when he reached glory.” Jacques Lipchitz attended the graveside funeral, officiated by a rabbi, and recalled: “Everyone felt deeply that Montparnasse had lost something precious. Something essential.”
Sir Jacob Epstein, the British sculptor who had known Modigliani in Paris, aptly acknowledged: “Amedeo Modigliani left behind a life’s work in art.”
Fred B. Adelson Ph.D. is professor emeritus at Rowan University, where he taught art history. He lives in Cherry Hill.